Hypnosis: The Truth Behind The 7 Most Common Myths 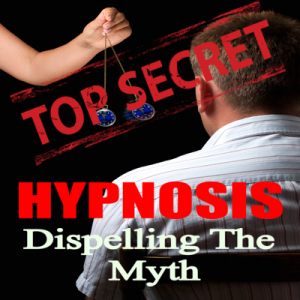 When I talk to people about hypnosis, I’m always struck by just how many misconceptions surround it.

There’s a popular image of a slick mind-control artist with a swinging stopwatch, guiding his subjects into a trance-like state where they obey his every command, but it couldn’t be further from the truth!

With that in mind, I’d like to clear up exactly what hypnosis is — and what it isn’t.

Hypnosis is a natural state of focused awareness.

Many people turn to hypnosis to help them with certain challenges, such as losing weight, overcoming phobias, breaking bad habits, or fighting anxiety.

The root of these challenges often lies in the subconscious mind, which is why they can be so difficult to overcome using conscious thought alone.

Hypnosis helps by guiding you into a state of deep relaxation, in which your conscious mind becomes subdued.

Your subconscious mind comes to the forefront and you become hyper-aware of the many thought processes going on ‘behind the scenes’.

In your hypnotic state, you’re able to observe obstacles like fears and limiting beliefs, and you’re more receptive to suggestions or ideas that will help you to challenge them and move towards your goal.

There’s no doubt about it — hypnosis is pretty powerful stuff. However, it can inspire some apprehension in people who may not fully understand it.

Here, we’ll break down the misconceptions and discover the truth behind the myths. Let’s start with the most common one…

Stage hypnotists often refer to the hypnotic state as being ‘asleep’ or ‘under’, and their subjects appear completely out of touch with their surroundings.

It’s hardly surprising, then, that many people believe they’ll be put into some kind of altered, vulnerable state.

Understandably, this causes some concern, but the truth is quite the opposite. Because both your conscious and subconscious minds are open to your environment, hypnosis is often described as a heightened sense of awareness.

You always know what’s going on around you, and you’re always able to respond.

You’re in a deep state of relaxation during hypnosis, so it’s definitely possible that you may feel sleepy at times.

However, you’ll always be able to sit up, open your eyes, and become fully alert, just as you would if you were falling asleep in your favorite armchair!

People often believe that the hypnotist takes control over them when they’re in a hypnotic state. He might make them do things they wouldn’t normally do.

He might get them to divulge their deepest, darkest secrets!

You are more suggestible under hypnosis, but this doesn’t mean that your core morals and standards fall by the wayside.

It simply means that you’re more open to changes you want to make, like quitting smoking for example.

If an unethical hypnotist tried to introduce an idea that you’d normally object to, you’d react no differently than if he’d suggested it over coffee!

So why do we see all of these people on TV, clucking like chickens and singing on command?

Well, stage hypnotism is entertainment. More often than not, the people on stage are actors, but in some instances, they’re volunteers who want to participate in the theatrics.

While it adds entertainment value to present them as straight-laced, serious types who’ve gone wild, the truth is that they’re open to silly suggestions because that’s their idea of a good time!

Take stage hypnosis with a grain of salt, and remember that real hypnosis is a process of self-improvement, not entertainment.

Contrary to popular belief, you’re in control every step of the way.

You can never be made to do anything you don’t want to do, and you can stop the session of your own accord if you feel uncomfortable at any point.

That brings us to our next myth…

We’ve all heard the urban legends about the girl who got ‘stuck’ and never woke up, or the guy doomed to break into song at the mention of a trigger word for the rest of his life.

It’s a popular TV trope, but in real life, it simply doesn’t happen.

I can’t stress this enough — you are always in control!

Coming out of a hypnotic state is as simple as opening your eyes and looking around, and there’s nothing a hypnotist could say or do to prevent you from doing so.

The worst that can happen?

You may be so relaxed you fall asleep, but you’ll simply wake up as if from a nap.

While hypnosis has been around for a long time, it hasn’t always been well-understood.

In the absence of scientific rationale, hypnosis took on something of a dark, mystical quality that has persisted to this day.

Naturally, this doesn’t sit well with everybody, particularly those whose religion would be incompatible with such a practice.

The reality is that hypnosis is grounded in cold, hard science.

It’s been studied extensively for years, and we now understand that it’s a perfectly natural state of focused awareness.

Those of us who practice hypnosis are no more supernaturally inclined than the next person; we simply possess the skills, experience and psychological knowledge necessary to guide you into the hypnotic state and help you to make positive changes on a deep subconscious level.

Today, you’ll see hypnosis promoted as a miracle solution for everything.

Overcome your fear of heights in one session!

People can end up disappointed, disillusioned, and out-of-pocket by such grand claims, so it’s no wonder that there’s some skepticism surrounding the practice.

Personally, I’ve used hypnosis to make incredible changes in my life, and I’ve helped thousands of people to do the same.

It really is an amazingly powerful tool, but what myself and my clients all had in common was a strong desire to make these changes.

Hypnosis will help you to move the obstacles out of your way, but you must be open to change, you must be committed to action, and you must accept that it may not happen overnight.

Be wary of anybody who tells you otherwise!

Think you can’t be hypnotized?

You might be surprised to know that you enter a hypnotic state every day. Your body experiences a period of deep relaxation as you fall asleep, and then again as you wake up.

Between those times, you might experience a state of intense focus and hyper-awareness as you concentrate on driving, get absorbed in your favorite TV show, or get lost in a good book.

While it’s true that some people are a lot less susceptible than others, we now know that everybody can be guided into a hypnotic state under the right circumstances.

If you find yourself unable, it’s most likely because you’re not open to it.

Perhaps you’re anxious about being hypnotized, you struggle to relax, or you’re skeptical of the idea as a whole.

If so, hopefully this post has helped to clear up any misconceptions that have been standing in your way!

Ready to discover the power of hypnosis for yourself?

My membership site, Limitless, features a library of over 100 recordings, helping you to achieve everything from weight loss and fitness, to wealth and career success, to freedom from stress and anxiety, and more.

I use a combination of hypnosis, meditation and visualization to help you discover your own personal power, manifest your goals, and bring your dreams to life.

If you’re ready to discover the power of hypnosis for yourself, click on the button below and start your Membership today.